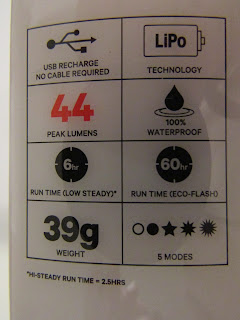 The Four Eyes has a fantastic range of 5 flash modes! 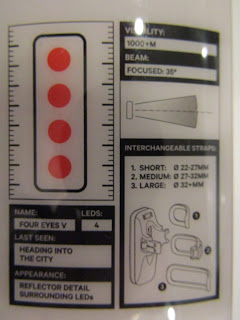 Charge wise, some may find a problem with using the light on the USB port, as it may block up the port next to the light.


Out on the road.

The Four Eyes can be made to shine very bright if needed, but found in a group ride out best not to have it set to a High mode or a flash setting, but out on your own you can easy switch from any mode you desire, with just a quick press of the button.
The Modes on the Four Eyes are very clever,

USB: Rechargeable Lithium Polymer battery lasts for 6 hours on steady/low setting and a whopping 63 hours on the flash mode! great if your commuting to work on your bike.
INTEGRATED USB PLUG : Designed to be exposed to the elements, the plug is waterproof and will not be damaged by exposure, the design is rather clever here from Knog, it is incorporated in to the strap fitting which keeps it safe and out the way when fitted to the seat post.
ON/OFF BUTTON : Knog have done the popular press and hold for a few seconds to kick the four eyes in to life, makes sense when the four eyes is in your bag or backpack, saves it from being switched on accidentally.
100% WATERPROOF: The Blinder MOB V Four eyes are IP67 Tested and 100% waterproof against all elements. and this makes it more or less bomb proof!
WEIGHT: The Knog MOB V four eyes is a real light weight weighing around the 39g mark!
VISIBILITY : Out on the road, you can have the Knog Mob set to high to make you be seen at over a 1000 meters! This I can believe as it is bright! Super bright!
LIGHT MODES : The clever part to the Knog Mob V four eyes is the mode setting's, you have 5 from this small slim rear light, The way Knog describe the modes are as follows, Steady, Fast flash, Organic flash slow, Organic flash fast, and Eco flash! (Not to sure where the Organic part comes in though!)
OUTPUT: 44 lumen's (LED Rating) must admit I thought 44 lumen's did not sound a lot, but it is bright enough during the day rides on and off the road.

My verdict on the Knog MOB V Four eyes.

A Nice slim and well thought out light, I never had any charge issues with the USB port, mode setting easy to change and run through to the one I wanted, the MOB also takes a bit of pounding on a MTB track, the light never moved on the seat post, amazing brightness from something this slim, Knog have made that possible with the  way they have the Surface Mount (SMT) LED designed to provide maximum brightness level for up to 90% of the battery burn time for each mode.
So weather you just do the commute ride, or even out on a Club ride consider the Knog MOB V Four eyes for a serious bit light!


Take a visit to your local bike shop to check out the Knog range of lights or see http://www.todayscyclist.co.uk/

Pop in to our local bike shop in the Stow Harlow Essex. https://www.leevalleycycles.co.uk/


Please Feel Free to Support Our Sponsors Adverts. Thank You.

Foot Note This is not a Paid Advertisement for Knog or http://www.moorelarge.co.uk/ distributer for the UK