When I came across something that cried out Cycle Safety, I just had to shout about it!
This is what happened today 14/02/2015, I had just returned from a bike ride and popped into my local cycle shop [Lee Valley Cycles https://www.leevalleycycles.co.uk/] a few of us were chatting at the front of the shop, when Dave the shop owner appeared, one of our riders had noticed a new jacket he had hanging up in the shop and asked about it! well before you know it he had it off the hook and  was showing us his latest acquisition, he then explained how good it was and you could tell it was certainly something a bit different.
The jacket is made by a company called Proviz, he explained how the jacket worked in the dark ie: how when a vehicles head lights hit the jacket at night it becomes completely reflective, not just in strips [like most reflective clothing] but the whole jacket, it was absolutely amazing, it was as if the jacket had absorbed the light and was reflecting it back, like a mirror would reflect sunlight. 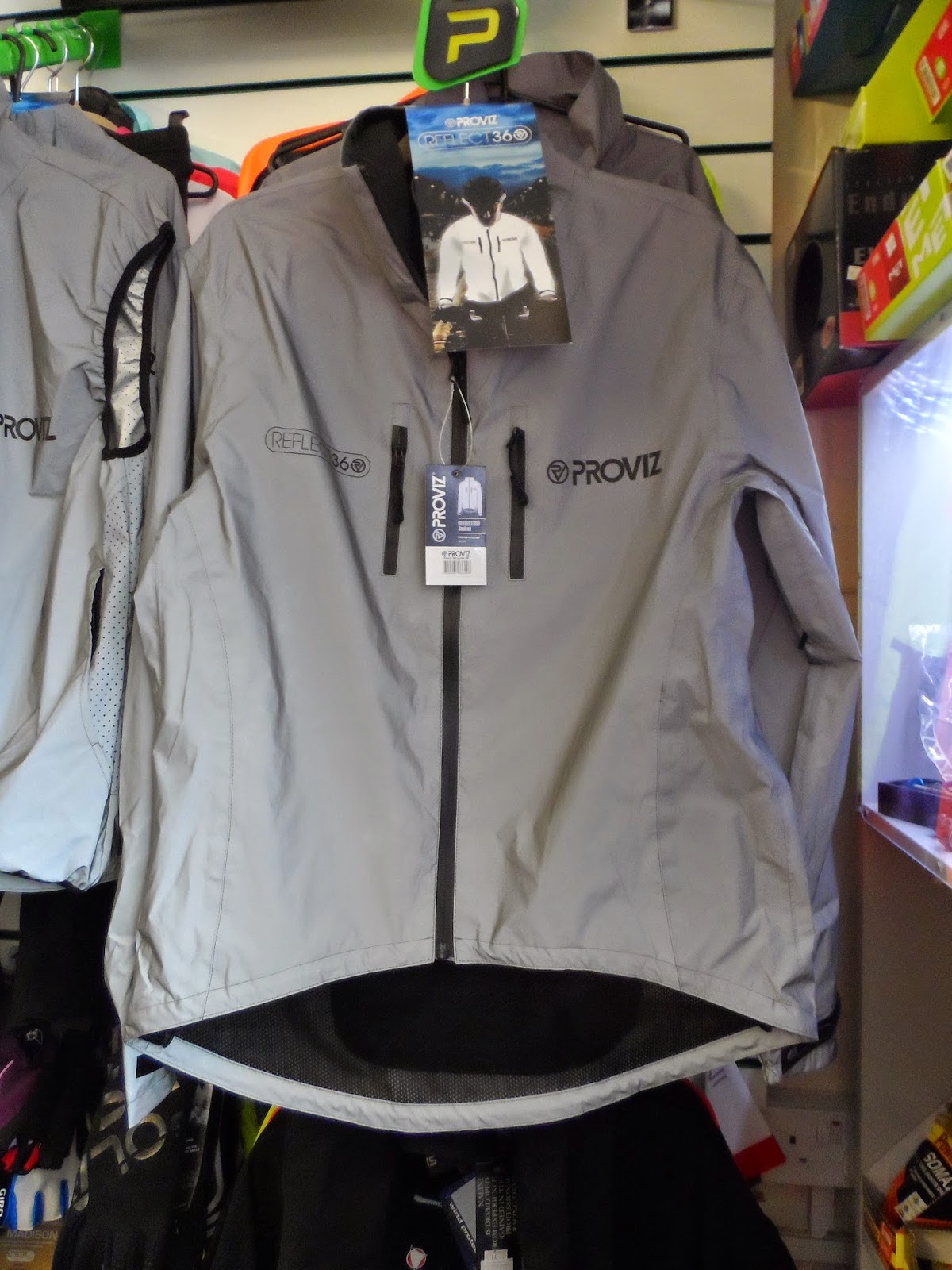 Doesn't look all that special now does it!
Just a normal jacket, you can't see what all the excitement is about, well follow the pictures down and you will see! 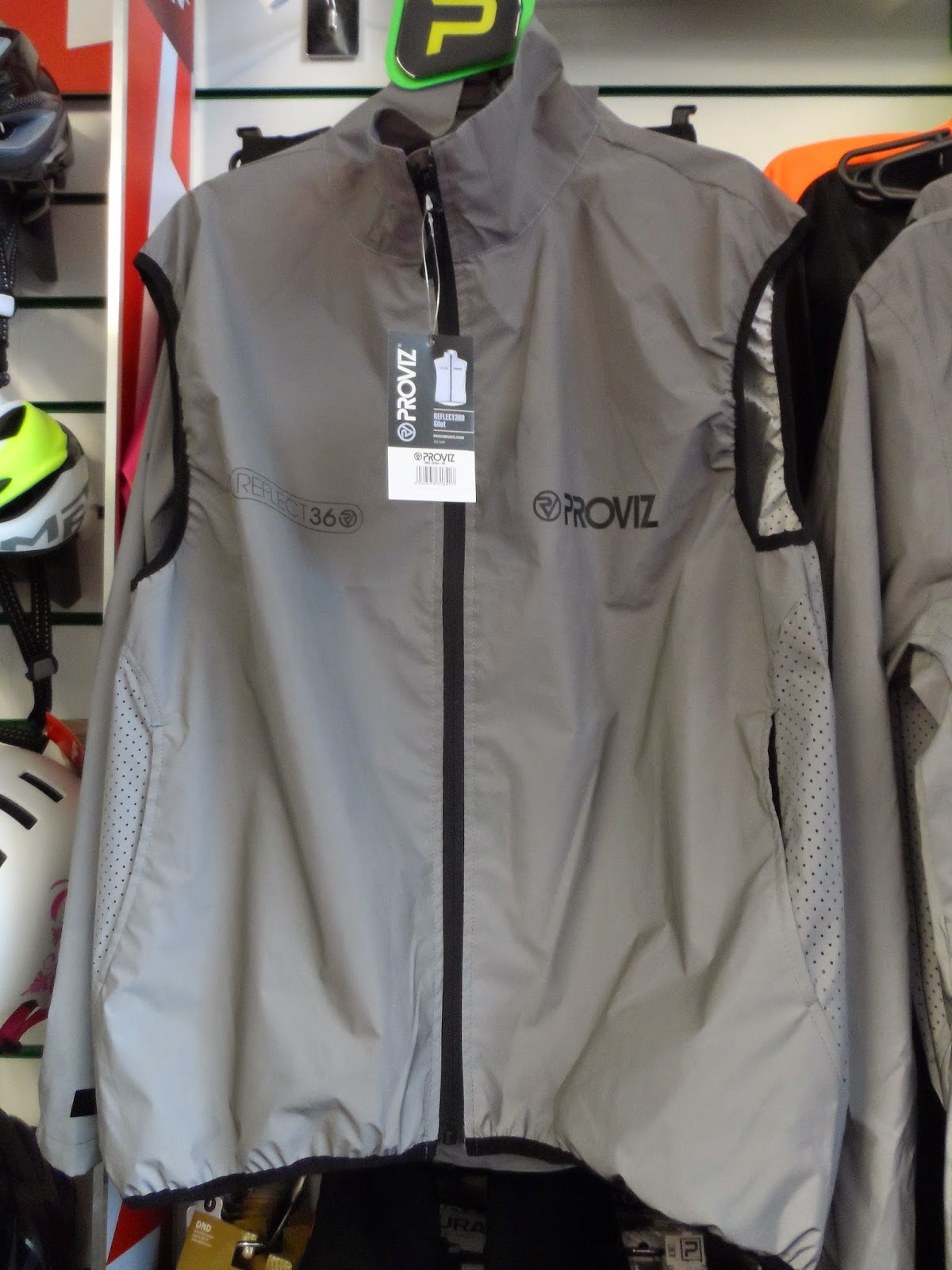 This one is ideal not only for cyclists but also for joggers, horse riders and even just walking your dog at night.

This is where it gets to the clever part!

The next photo was taken with a simple flash on a Samsung compact camera! 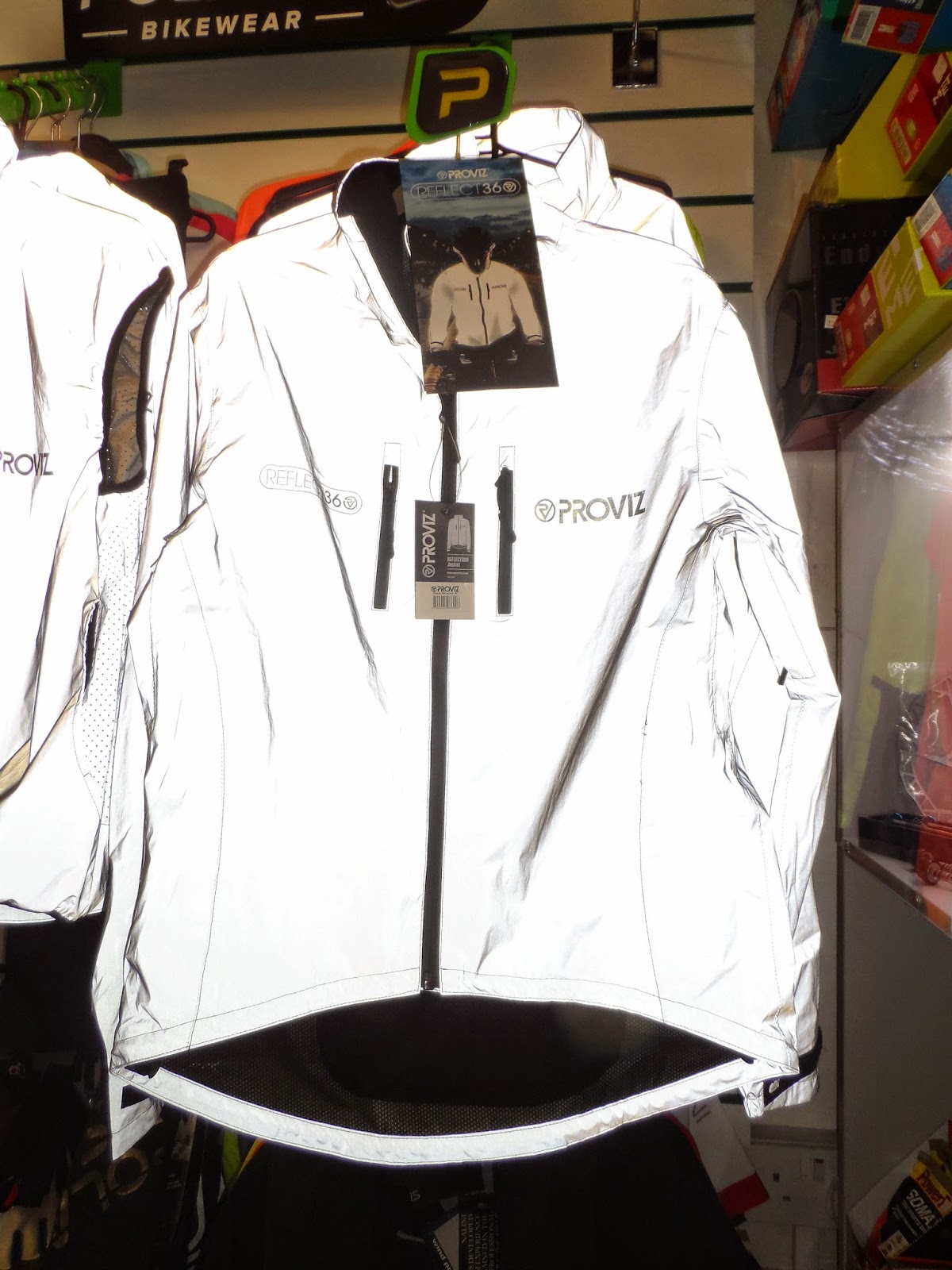 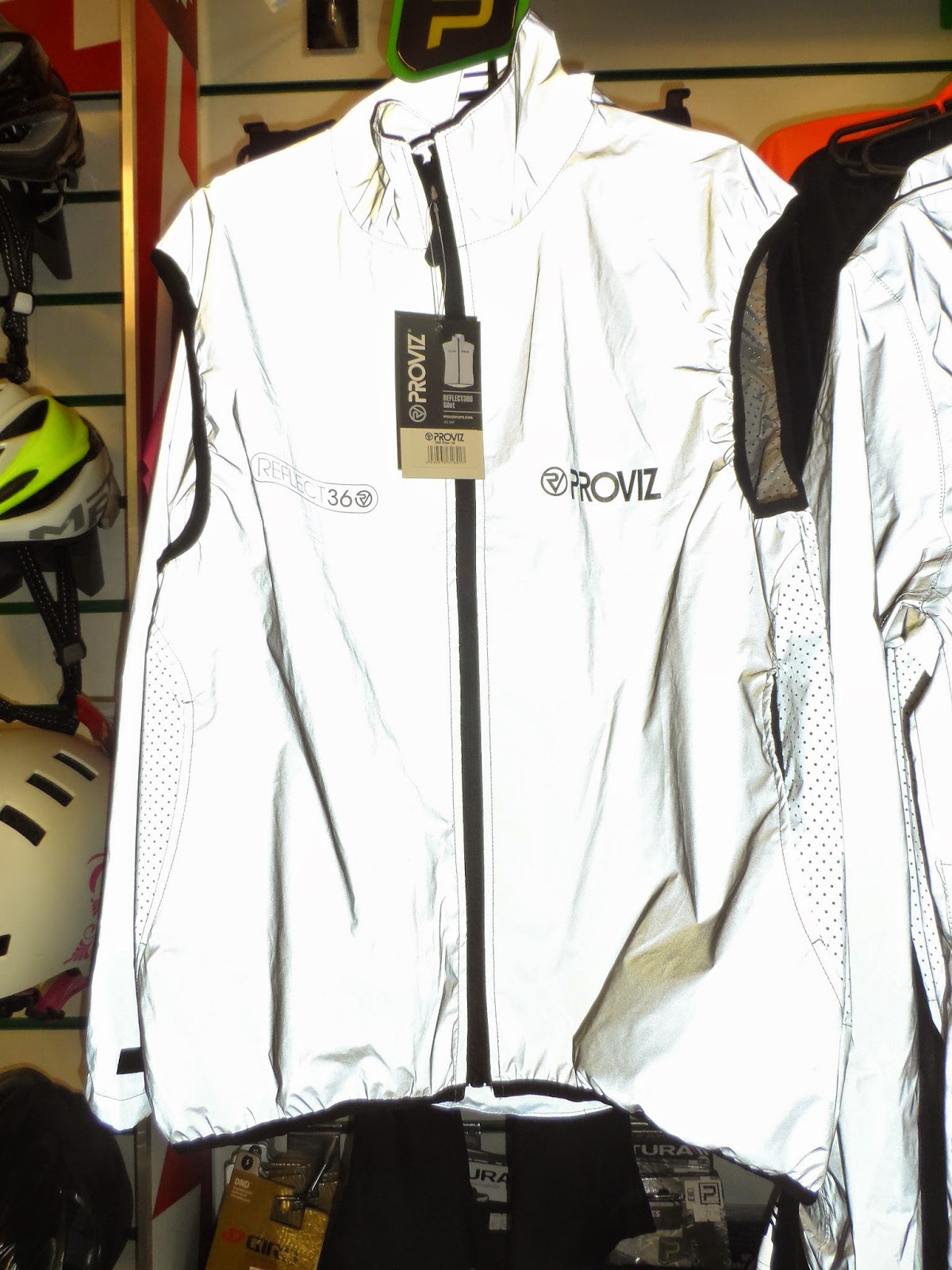 Even works for the Jogging Gllet as well!

How does it work

As much as I can find out about it's construction is it's made some sort of secret reflective material [there is not much information on there website], so it must be a well kept secret! but I personally think it is made by using a 3M  Scotch-lite Reflective Material, and this is the nearest I can get to finding out about it, I could be wrong or even told to delete this part of the blog review by Proviz
However it is made it works!
Take a look at the video on the Proviz Reflective range

A very impressive demonstration at night when vehicle head lights shine on the Proviz Reflect 360 cycling jacket.
Proviz have a wide range of reflective jackets for cyclist, runners, horse riders, children the list is endless, check out there website here

Just had to try one on ! 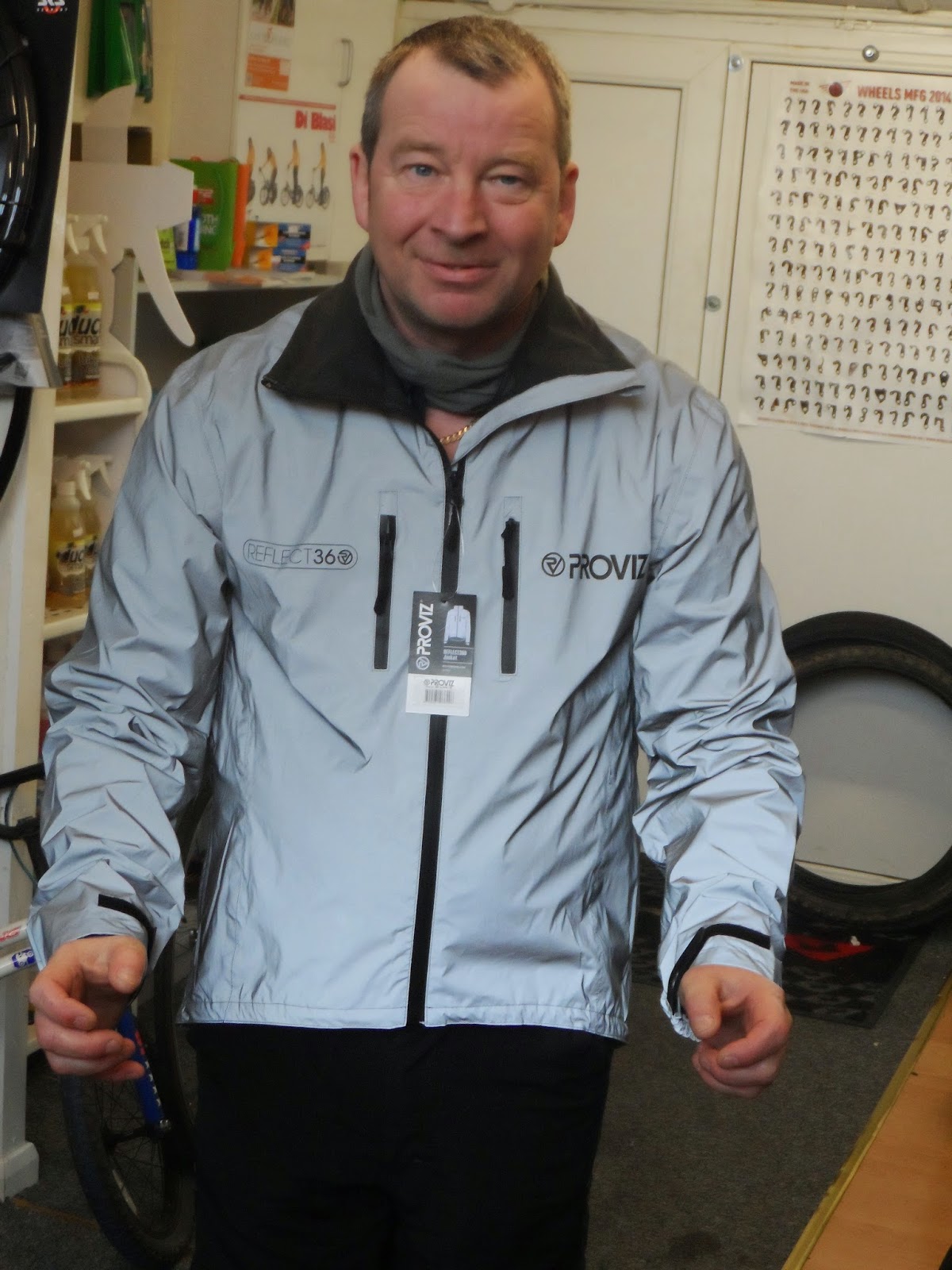 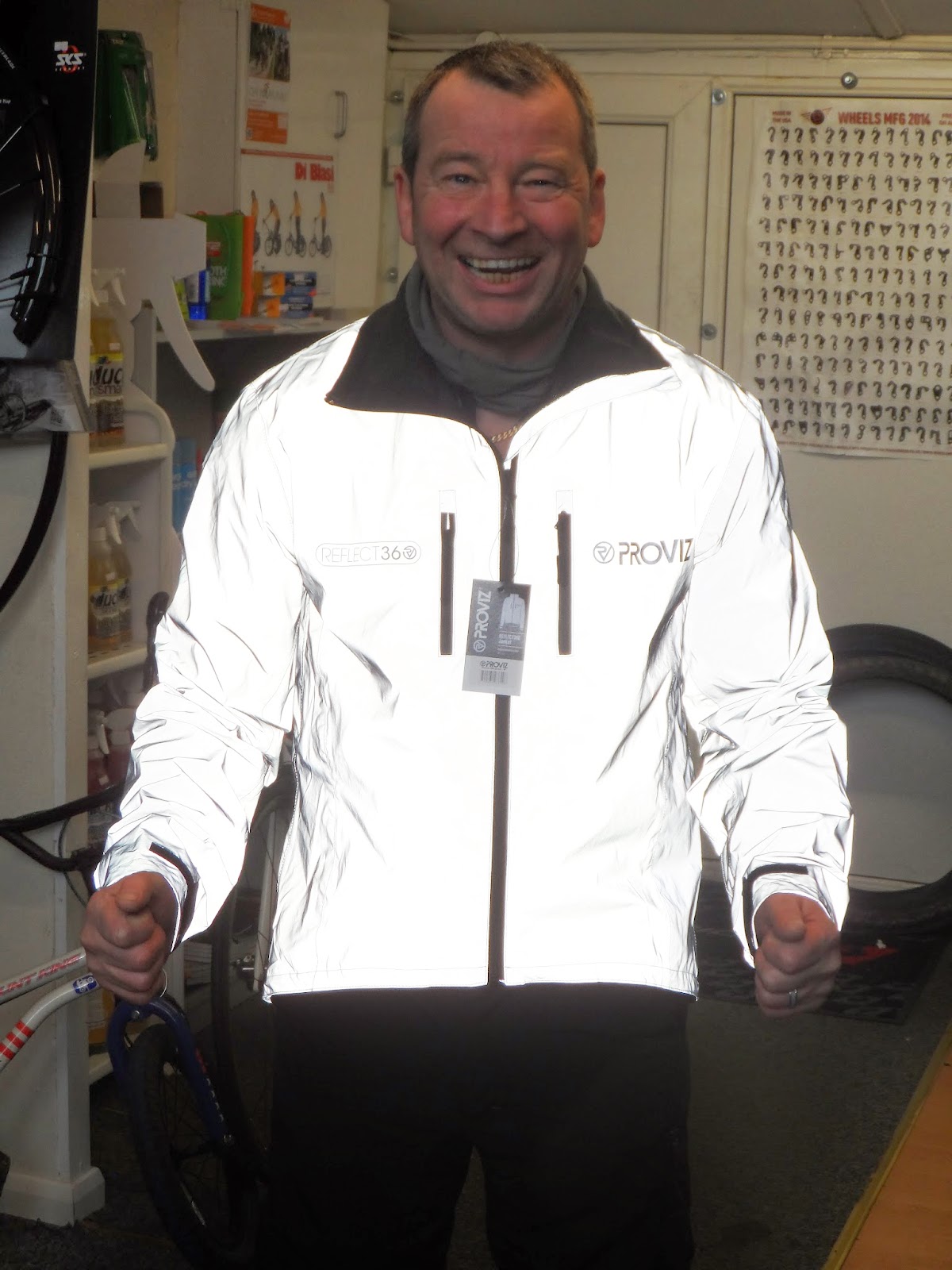 Now is that clever or what !

Check out Lee Valley Cycles for your nearest Stockist 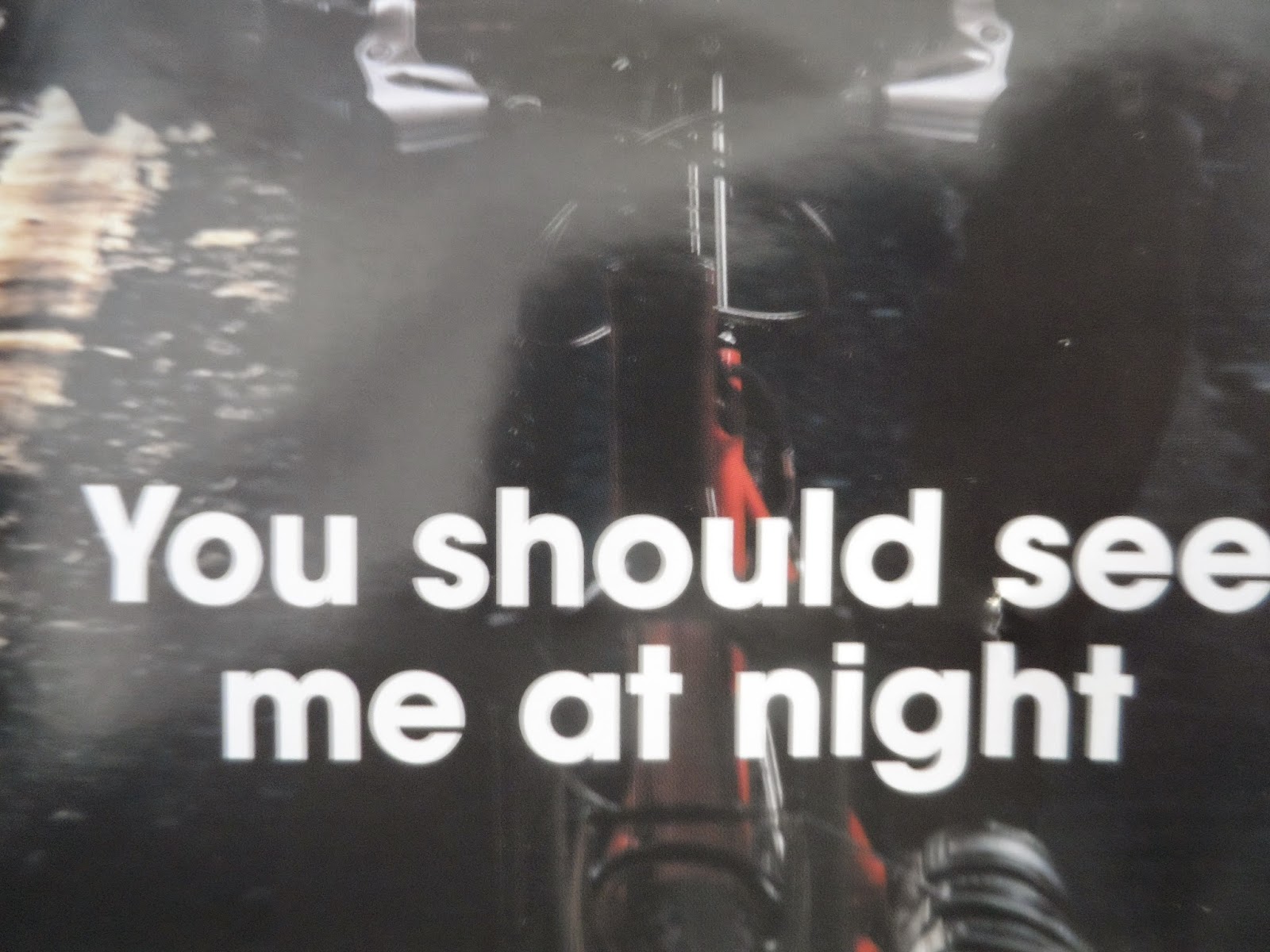 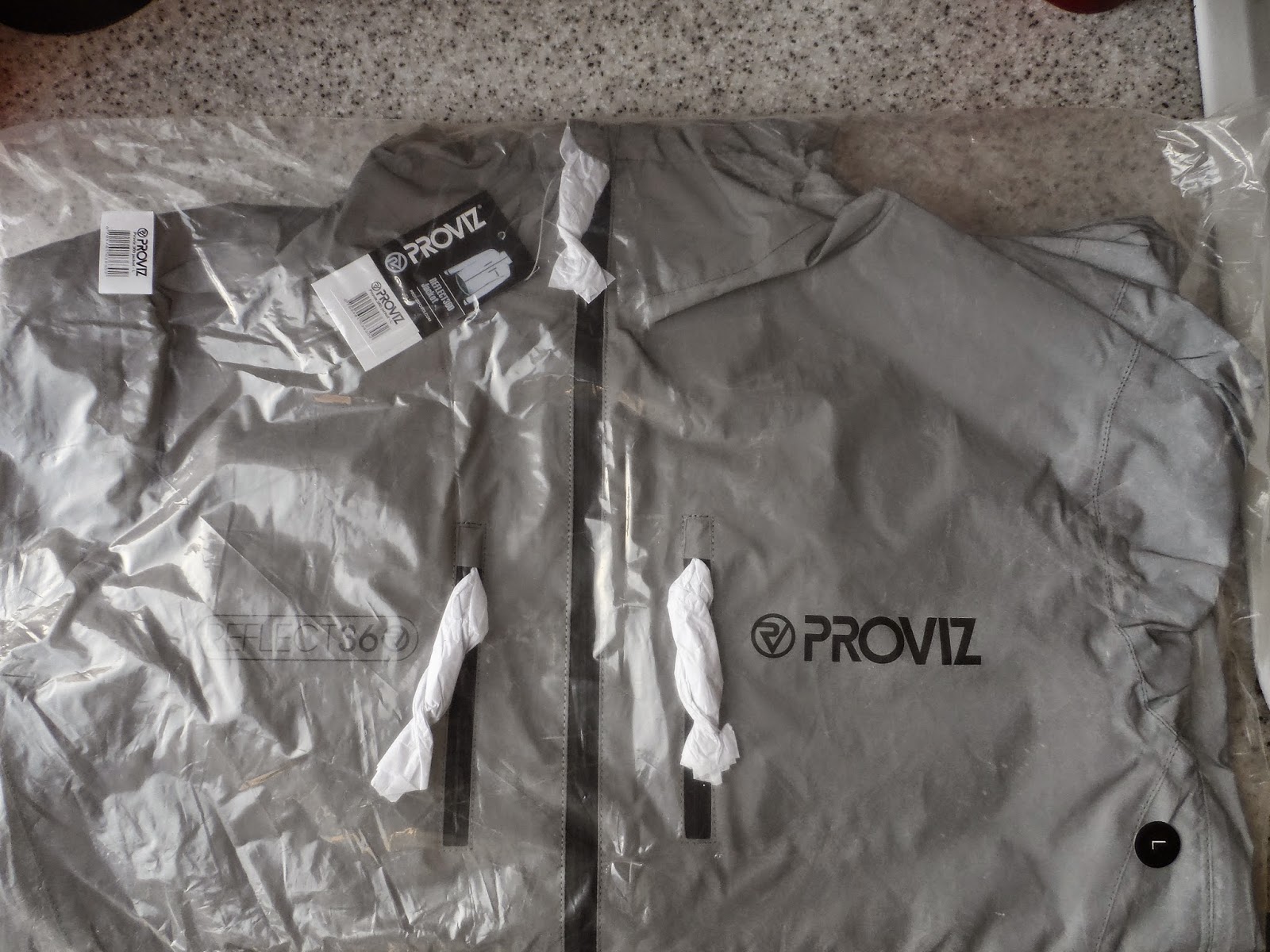 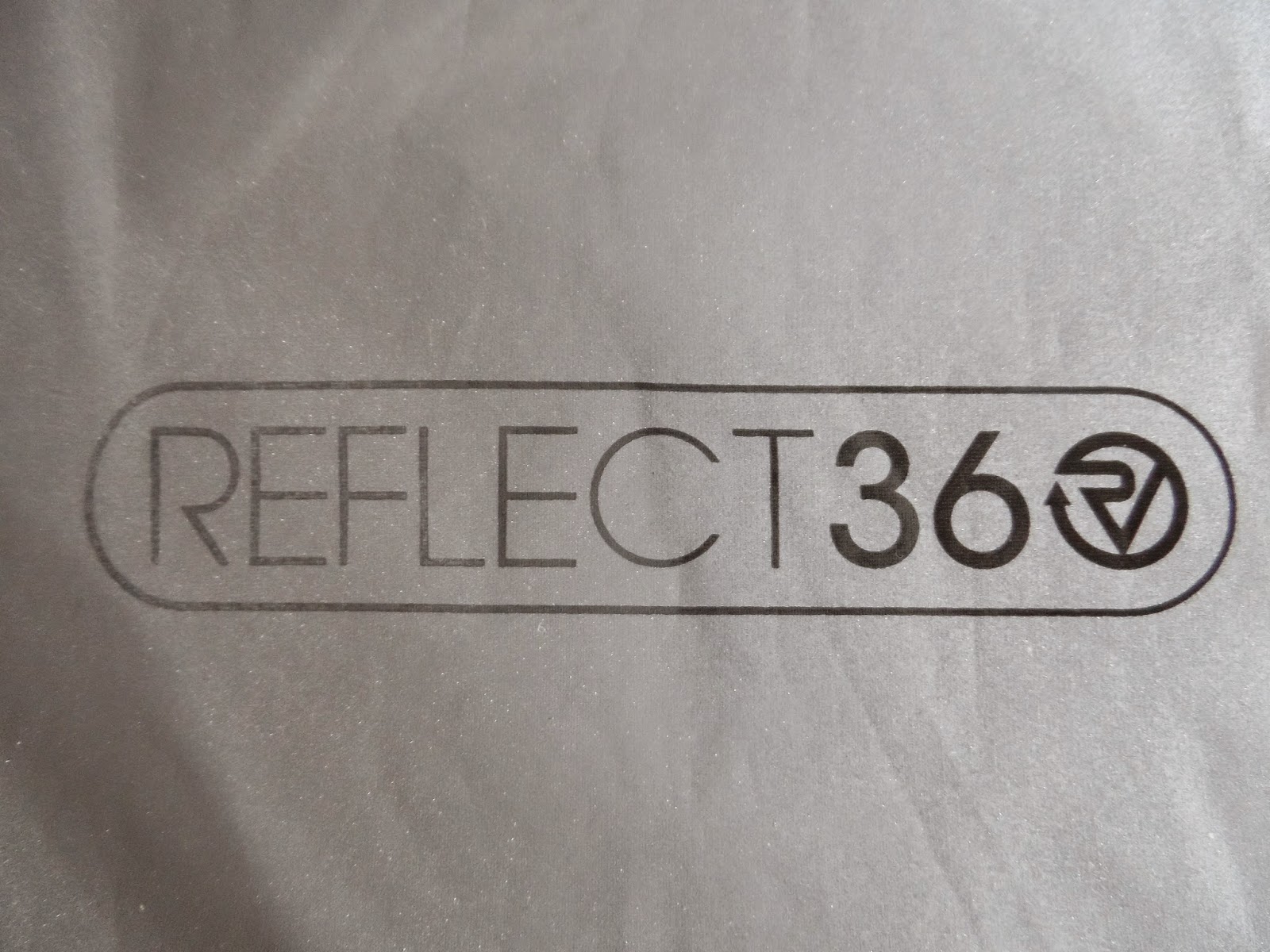 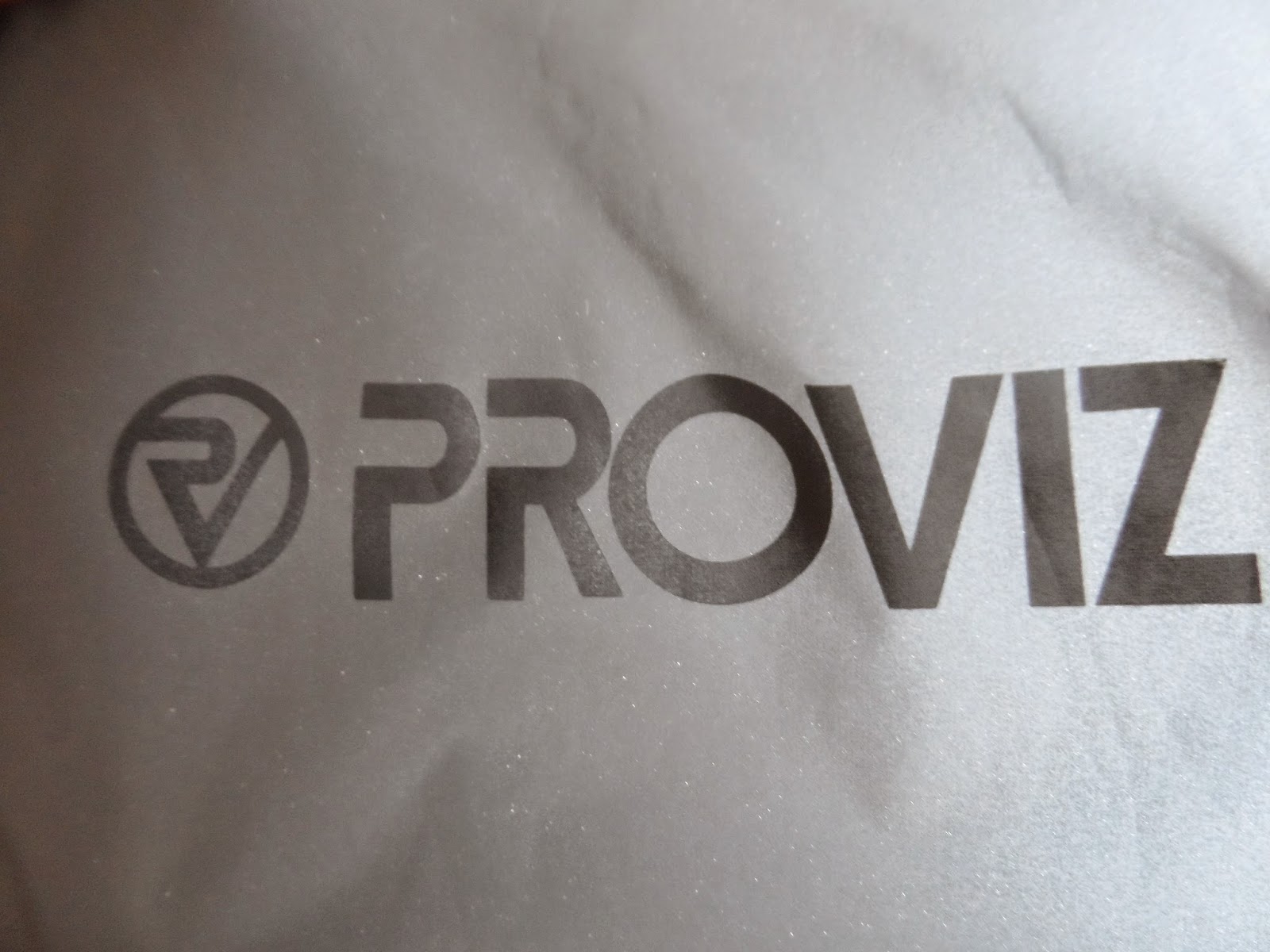 Proviz the Safest cycling jacket we have ever had the pleasure to review.
Bringing safety one step closer. 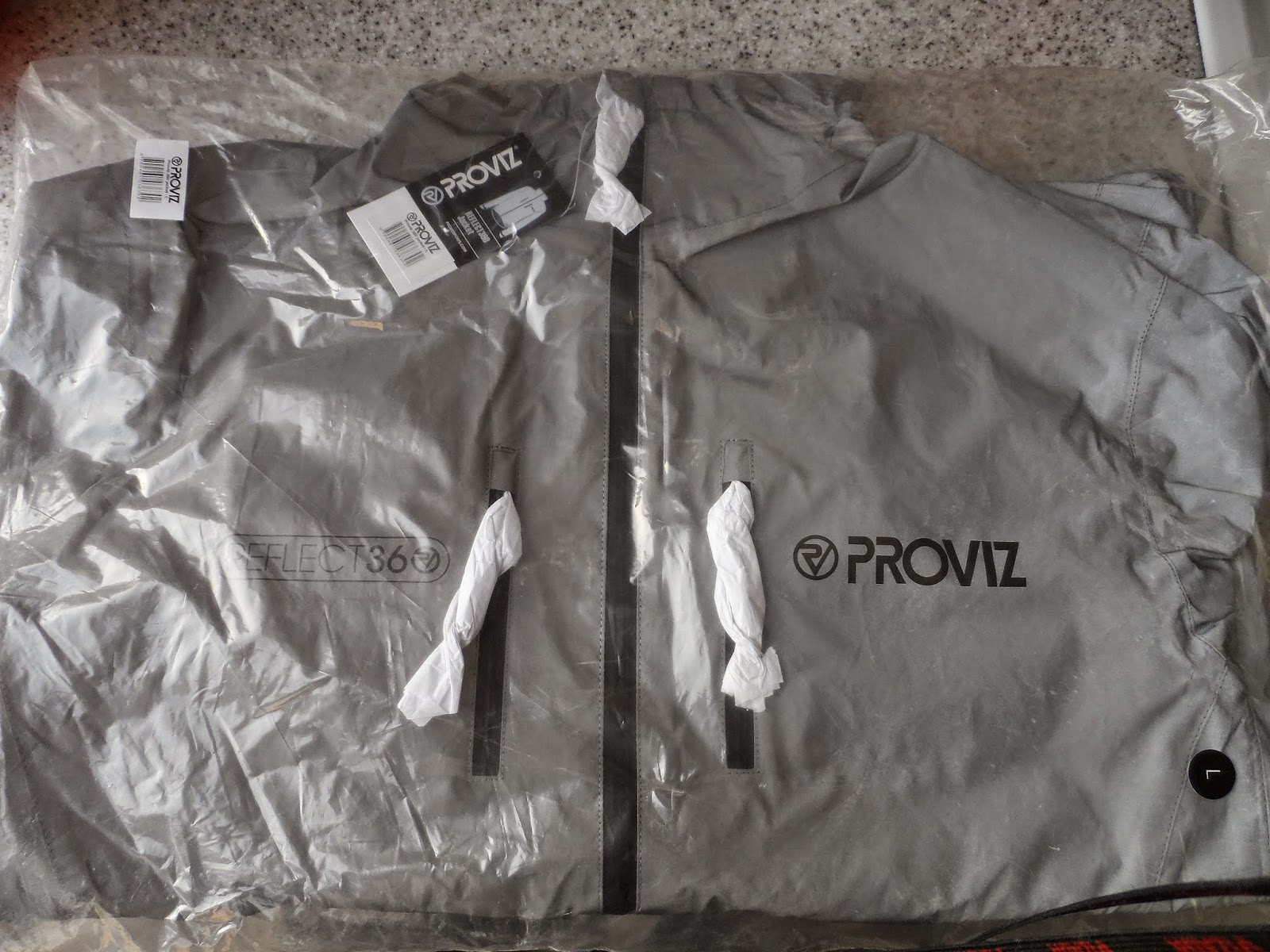 Inner pockets and side vents

How did the Proviz 360 Cycle Jacket fit

The jacket fitted well and all I had underneath on this ride was just a cycle shirt, as I was not too sure whether the jacket would make me sweat or not, but I had no problems with the Proviz 360 not being able to breathe, it was a windy kind of a ride with the wind head on and also cross winds.

The cuffs are tightened up using Velcro strapping to secure the cuff's, with a grab strap tighten/un-tighten the cuffs.

The Proviz 360 has a arm vent under each arm, to open pull down the zip, and re zip to close, once open it reveals an air mesh to allow air circulate, good touch I thought.
On the rear shoulder Proviz has incorporated an  Air vent across the back under a flap.

Proviz has designed a rear pocket into the 360 Cycle jacket

Waterproof storm zips are used on all of the zipper openings.
Zips feel top quality and the arm vents are well ventilated when unzipped, inner pockets are nice and secure, to be able to stow items in them.  The only draw back I could find was with the two outside breast pockets, these were a bit on the small size to be able to put my hands right in to get items out, but that was no real problem.The rear pocket is easy to access whilst riding, so makes it an ideal place for energy bars etc, or to even keep your spare inner tube or pump.

I was very impressed as it was a cold windy day with a head wind, the jacket fitted well and I never at anytime felt confined or over heated, this ride was done on a road bike at a slow pace.

The next ride out was a evening one along a towpath, the temperature was cool/cold, I had on a base layer, cycle shirt and the Proviz 360 cycling jacket.
I cycled just over 15 miles using a 29 inch MTB I carried a spare inner tube and a small B'Twin hand pump in the rear pocket, it was very comfortable and not once did I have to fumble around to move it to a more comfortable position.
One problem I did find was, with winter cycling gloves on I found it hard to zip up the jacket when I was riding, but I think the zips will loosen up in time as the Proviz 360 gets more use.
On the ride I didn't feel to hot or to cold, the arm vents worked extremely well when I picked up the pace a bit on the ride. 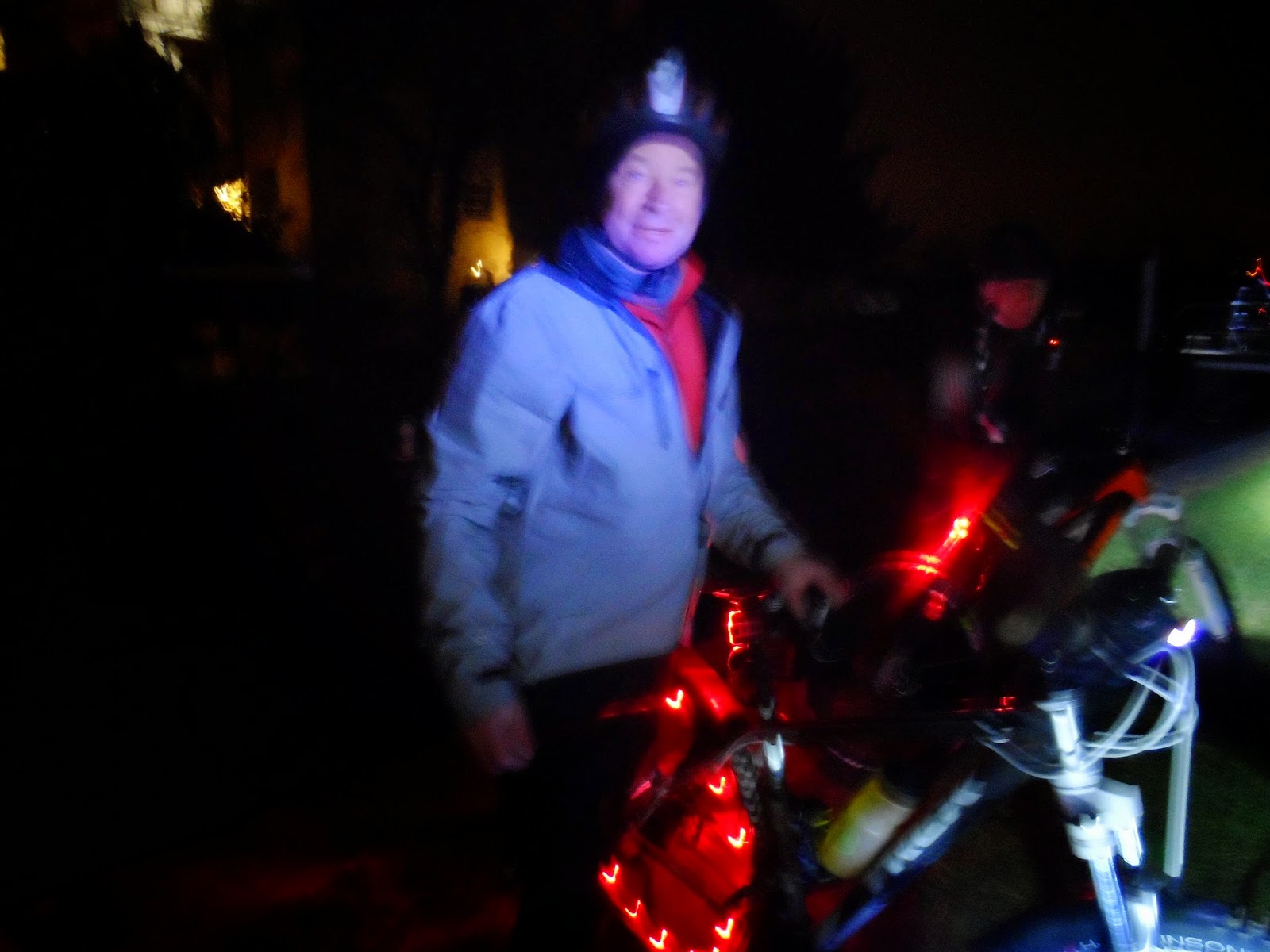 Here the photo does not do the Proviz justice as it is darkens! 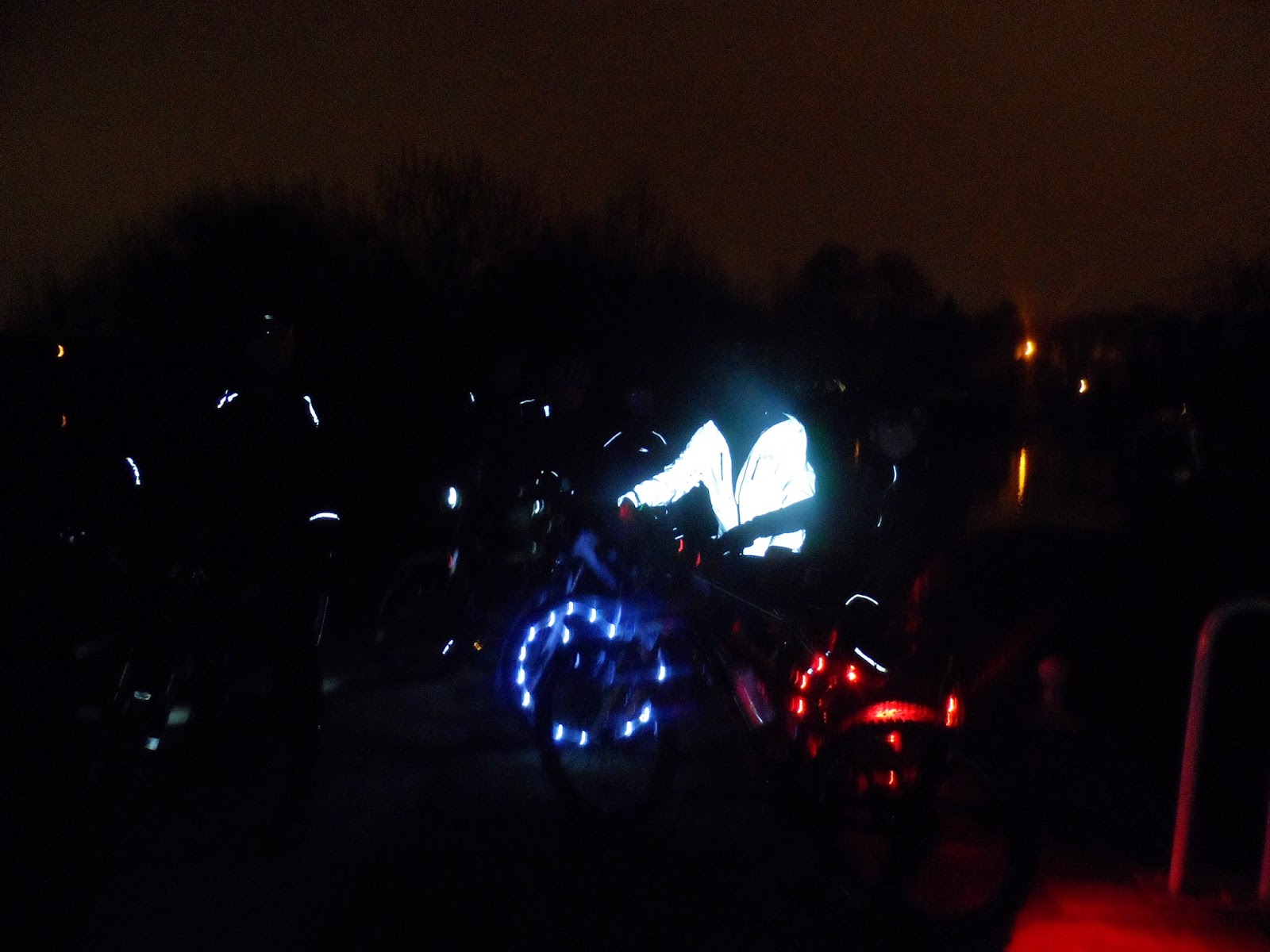 This is a great photo if you look very careful you may just be able to spot the other cyclists standing beside me!

Many more photos to come in due course.

If you cycle at night, you really must consider checking out this jacket, reviews just do not do the Proviz 360 range justice, it is Not just a Hi-Viz Cycling jacket, this is something a lot more than just that, it makes you stand out in the dark !

The Proviz 360 is waterproof

check out the Proviz 360 You tube video here

I will be adding peoples comments on the Proviz as soon as I can, including more photos.


Thank you for taking the time to read my reviews, I hope it makes it a lot easier to choose cycling products that suit you.

03/04/2015 Pedal For The Js Charity Rid at Chelmsford City
Came across a rider called Paul from Chelmsford wearing the 360 on the Pedal4thejs ride, and his comment were " Great all weather jacket, kept me dry and cool at the same time" Well worth getting one. 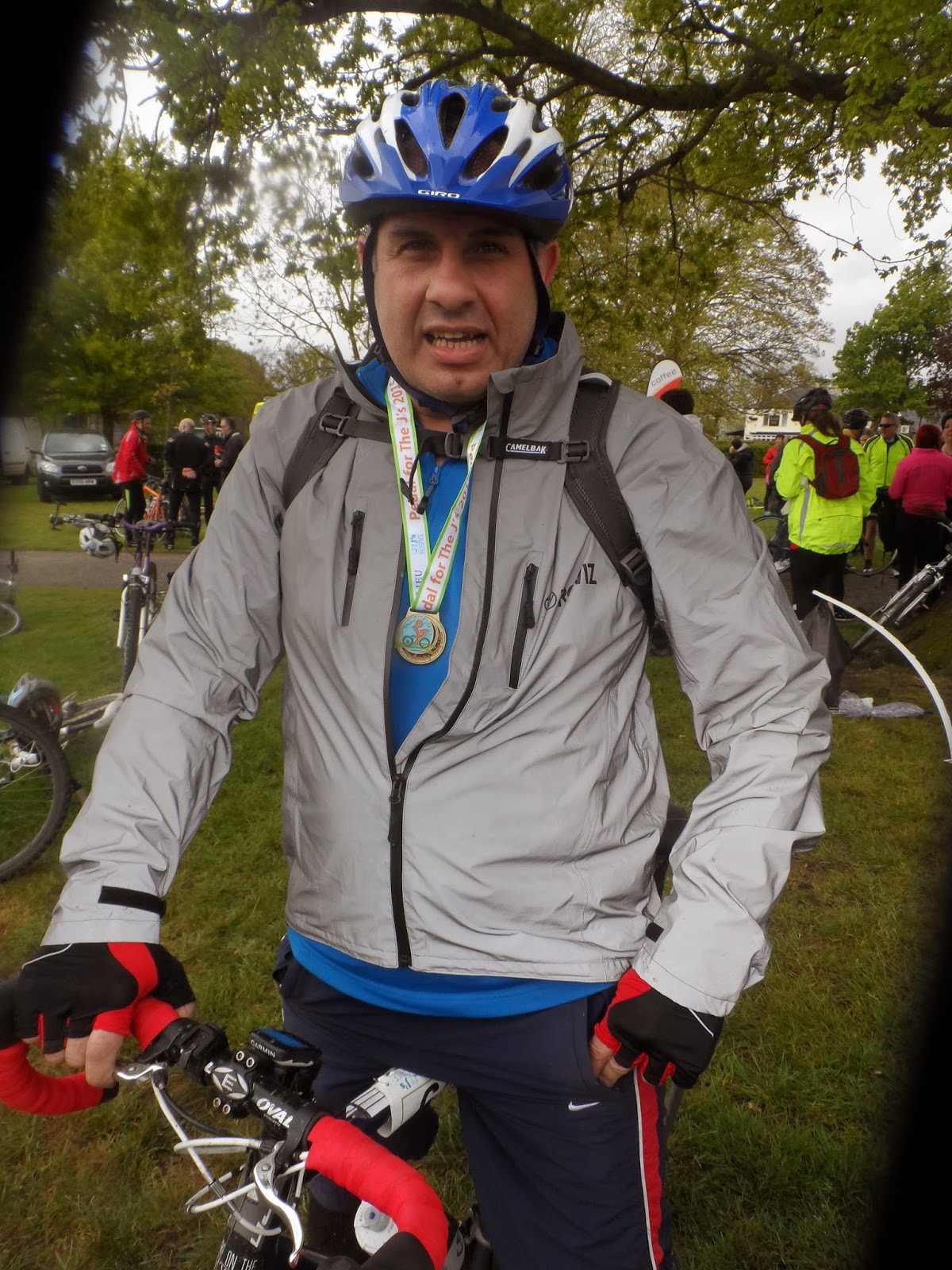 It had been raining from start to finish and Paul kept dry all the way!
(Quote used by kind permission from Paul of Chelmsford City)

Went for a ride at night and the rear light I use had gone off!
I did place a spare light I carry only to find that was also fully discharged!
I cycled on a main road for miles and not one car tooted me to tell me my rear lights were not working!
That is how good the Proviz 360 Cycling Jacket is.
The night was chilly but the Proviz kept me warm! 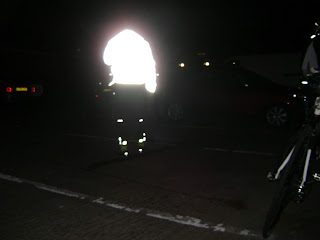 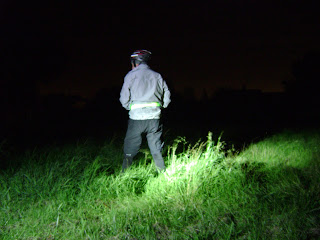 Foot Note This is not a Paid Advertisement for Proviz or Lee Valley Cycles
- March 20, 2015