Velocity V7 Armband for iPhone 6S Plus and iPhone 6 Plus


An Armband design by sports people in the USA, Ideal for the jogger, Horse rider, Cyclist, and for just about anyone who needs to take their phone with them whilst out and about. 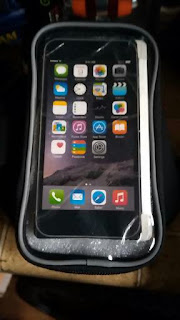 
The V7 will take just about any phone, but it is best on the Apple I-phone 6 plus models, the phone I will be testing on the V7 is a ZTE Blade V6, its about the same size as the I-phone bigger models, and fits into the V7 Armband a treat.

Features:  On Sporteer web page they describe the V7 as follows

I have had the pleasure to use another Sporteer armband, the review link below
( http://harlowcyclingpagegroup.blogspot.co.uk/2015/10/sporteer-wearable-smartphone-protection.html ) and found that to a brilliant piece of kit, so how will I get on with the slightly bigger V7


I used the V7 Sporteer armband on a Group mountain bike ride around the woods last night, 09/12/2015, and it was a ride with a difference!
The wettest ride I have been on in a long time, unfortunatly I had to leave my camera at home as it is not a waterproof model, so sorry to say no photos of the evenings ride out. I had the ZTE V6 in the armband all night during the ride, as it was just too wet to take it out to take any photos, I was drenched, the bike was covered in mud, and the jacket I had on was soaked through, and I had to remove the cycling glasses I was wearing as the rain was misting up the lens and I could not see where I was going safely, so in other words a "Madness Ride Out" .........!

How did the V7 do on the ride?

I can honestly say "Great"!
The Sporteer V7 kept the ZTE V6 dry as a bone, even though the case was ringing wet!
I did not get the chance to try the phone out as the rain was hammering down all night and I did not want to take the chance on taking the ZTE V6 out of the armband until I was home!

Only problem I had on the ride with the Sporteer V7 armband was it  slid down my arm every now and again,  and I had to re adjust it back up, I think this was mainly due to the amount of wetness absorbed by my jacket, I will give the V7 another test out when its not raining to see how I get on with it in better weather conditions.

Plenty of range here for every phone on the market!

Please Feel Free to Support Our Sponsors Adverts. Thank You.
Foot Note This is not a Paid Advertisement for  SporteerUK