I'm not much good at this Blog stuff, and if you have had the chance to read any of my so called Blogg's, you will probably agree with that statement!

But I came across a Product that has all been used by a lot of Builder's, DIY'S as well, Its Silicon Sealant!

Ahh, you might say, but I came across a New Type of Silicon Sealant, (well it is for me), this one is a little bit different, as it has different type of manufacturing process, now as I say I'm no professional on this subject, so will have to leave that to the technical Bod's and the sales Lady! or Man!

Bathroom Silicon will have the usual Anti-Fungicidal in it to prevent Black mould building up on it, so it should stay whiter for much longer, than one with out, in this product I'm going to tell you about it has Triclossan which is a powerful Anti-Fungal and Anti Bacterial agent, as stated on the Web-site, haven't got a clue what that is, but it's better than the old ingredient that go-into a Tube of Silicon, and sounds very impressive!

OK, if your still here I'll put you out your misery and tell you what it's called and by who,......

It's Made by a Company Called Silicon Master's, Who, I hear you say!
To save me writing a lot of stuff on who they are, check them out here....

They also on Face Book as well, and Twitter! so, they know the importance of Net working a Product, any way, I'm getting carried away a bit here........

Back to the story here!

I remembered I was going to reseal around the Mother-In-Law's Bath, as I had not long a go replaced her electric shower for one that works! and noticed the state of the Bath seal, now, I for one know who important it is to have a really good seal around your bath and around the shower area, it was @juliesilicon that reminded me, we got chatting, she said have I used her silicon, and I had to admit I never herd of them before! (sorry)

Well she got right into the power of her Silicon, and must admit was impressed  I went out to our local Trade centre and they had never heard of the stuff! , so back on to Twitter to tell Julie we don't have it down here, to be told the area is not covered yet! not to worry she says, ill drop one in the Post!

She did,as she said she would it arrived! 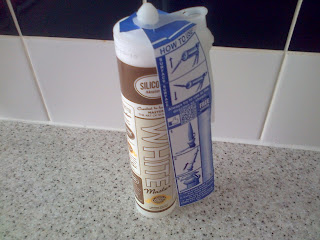 And here it is!
First thought was, "I's a Tube of Silicon"!
Straight away, i pulled the Nozzle off, and screwed it on the tube, and broke it! I know, I should have read the instruction's first before I mucked about with iy, it wasn't as bad as it sounds, I just broke a little tab that holds the Ex-tenable, Yes, I said Ex-tenable Nozzle in place!

Off to the Mother-In-Law's! 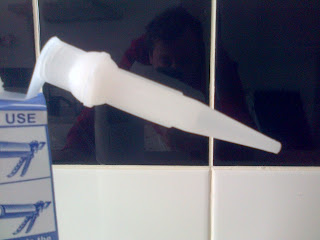 And this is where I now realise i cant add a Video of before and after! so its off to You Tube

The Before video is here

And the video of the area prepared is here

And the Finished video is here 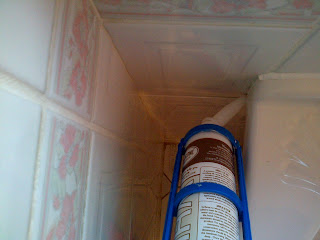 Here you can see the Ex tenable Nozzle in use!

The Best thing I like about this Silicon, is when you stop the trigger of the gun, the silicon stops as well, unlike any other Silicon I've used, where it keeps coming out the gun!

Smoothing off is as simple as it gets! so easy to work with, and no nasty smells either, it goes off quicker as well, we had the curtains back up in place after a hour!

Marks out of 10, Ill give it a 10 any day! the quicker this come's to our local Trade center the better!

So Thank you @juiesilicone for the experience of using such a great product!